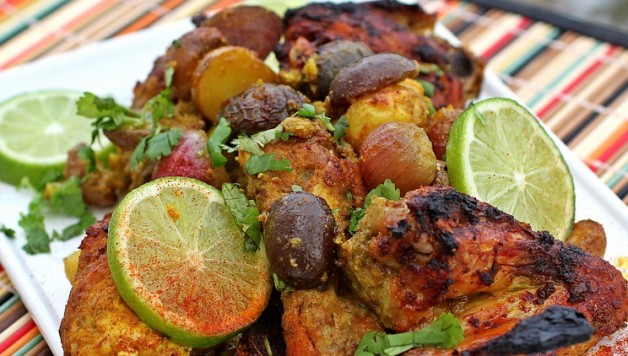 I can get lost for hours browsing the shelves of book stores but unless I am flying alone or reading a bedtime story to our son, it’a rare that I get the chance to read, so when I find a cook book that comes to life and tells a story, as well as introducing my to a brand new world of culinary flair, I know that I have found a winning combination.  Three words come to mind as I review Rinku Bhattacharya’s “The Five Spice Bengali Chronicles” – Intrigue, fascination and admiration.  I was enchanted by the title as soon as I knew my review copy was in the mail,  captured by the recipes and flavor profiles on the pages of the book before I had the chance to cook a thing, and filled with awe and respect for the insight into a life so different from my own.  Bhattacharya’s writing and recipes bring to life a childhood in Kolkuta, India with love and admiration for her upbringings.

The book opens introduces the Five Spices of the Benhal region by painting a historical, geographical and cultural picture of life in Kolkuta and recipes are broken up into sections covering mustard seed, nigella seed, fenugreeek, fennel seed and cumin seed and covers everything from da’al (lentil dishes) to mishti (sweets and desserts) and there is a wonderful balance of vegan, vegetarian, fish and poultry dishes.  In my humble opinion, the The Five Spice Bengali Chronicles captures not only the Cuisine of Eastern India, but the essence that makes this culture so rich too.

I quickly earmarked pages and annotated the recipes I plan to make from this book and I have a brand new copy that you can enter to win at the end of this post.  Whether you are familiar with Indian food, looking to expand your palate, or are looking for an insight into life Eastern India, I urge you to add this book to your collection today.

Now to introduce you to the author of The Bengali Five Spice Chronicles, Rinku Bhattacharya.  In this guest post, you can see how Rinku paints a wonderful picture of her dishes before introducing the recipe.

I am excited as I talk about this recipe because I finally get to share this one with people courtesy of Yosef and his wonderful blog.  Rather than give you a recipe from the book, I figured I would talk about something that actually did not make it into the book.

As we were going through the edits of the book, it seemed like the book was getting a little too long, so I needed to pare down.

Rather than trim and tuck existing sections, I ended up removing a chunk that was labeled, “The Influenced Bengali Table”. I often find it easy to remove a single segment, rather than remove parts of many segments, a technique I sometimes apply to meal planning.  I would rather prepare fewer dishes the way I like to make them, rather than preparing more dishes but compromise on how I want to make them.

The section I cute focused on the foreign influences and small migrant pockets that have made the cuisine of Eastern India richer. I often feel that when tables and flavors mingle, food realizes its full potential. The Bengali table has had its share of foreign influences. These influences are most notably from Portuguese, Chinese, Moslem, Jewish and British visitors.

This recipe, Kolkata Spicy Jewish Chicken Roast with Potatoes, is inspired by the Jewish population of Kolkata.

The Jewish community in Kolkata is said to be of Baghdadi origin and was one of the oldest Jewish communities in India, although it is worth mentioning that the first Jewish migrant to Kolkata was supposedly from Syria. Currently however, most of the Jewish community has migrated to other places including the United States. One of the reasons for the migration is attributed to the formation of Israel as an independent country, possibly attracting the migration of the Indian Jews to Israel.  There are still two working synagogues in Kolkata, you can see some of the pictures and history here.

The culinary influences of the Jewish table was shared and resulted in some dishes that combined Indian seasonings with Middle Eastern techniques. For example, instead of adding cream or yogurt in dishes the Jewish community adapted and used coconut milk, a substitute that helped them observe their own dietary restrictions while replicating the cuisine of the new land. The Jewish community in India also used goat meat and chicken for most of their meat based cooking staying away from beef out of respect for their Hindu neighbors. The flavors of the Bengali Jewish cuisine included sweet and sour flavors and a prominent use of nuts and raisins. Also, introduced to the Bengali table were stuffed vegetables which were considered to be of Jewish influence.

Where the culinary culture has also left its mark is through confectionary shops. Not surprisingly, this is also where it made sense for the migrated Jews to replicate their own confection with adherence to kosher laws. The most notable and oldest of these is called Nahoum and Son’s (or maybe it is now great-grandsons) in the heart of the New Market. I still love to visit this bakery, when I visit India.

In particular, I enjoy the savory dishes, including a small pizza that is in my mind very different from anything I have eaten anywhere else.

What I love about this dish is that the longer you marinate it the better the flavors develop making it a perfect make ahead dish.   I procured this recipe from a friend of mine who insists that it is the real deal. Well, actually the “real deal” as it was given to me was fried.  I have adapted this recipe for the oven and I like to use an assortment of colorful baby potatoes.  I’m sure my adaptation and it is probably what my kids will share with the next generation as the “real deal”!

What I can tell you is that it definitely makes for a flavorful and interesting chicken, which actually gets done with relatively little hands-on attention but tastes like you spent hours working on it. It has a longish list of ingredients but very few actual steps to put it together. 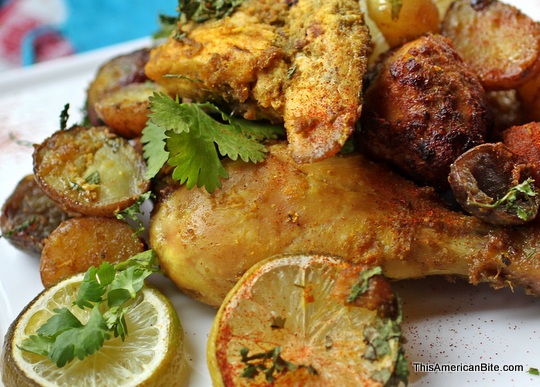