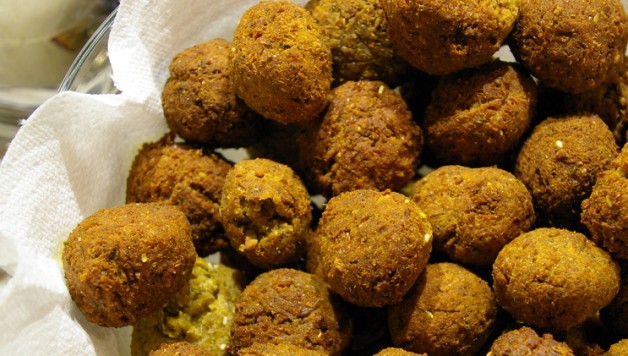 If you’ve spent any time in Israel, you’ll have an opinion on where to get the best falafel in the county.  In Jerusalem alone I had a favorite falafel vendor in four different neighborhoods, all of whom do something a little different when creating their version of this classic Israeli street food.  Whether you like your falafel in a pita bread or the larger Iraqi laffa bread; served with amba or hummus; or accompanied with fried eggplant or simply fries, the chickpea is the common denominator when it comes to a traditional falafel recipe.  Given how much I love chickpeas and how apt I am at making most of the foods that typically accompany falafel (hummus, tahina, schug and shwarma) I have no idea why this is the first time I am making this falafel without a shortcut.

As is often the way when I am making a dish for the first time, I looked up a number of recipes online to find a common theme.  I had hoped for an egg free and flour free falafel recipe so that these would be both vegan and gluten-free friendly but my mixture failed to bind without these additions.  My light, baked and slightly healthier falafel balls didn’t work out, but these traditional deep fried falafel balls I am sharing with you today were delicious.  For a lighter, less traditional version, my falafel flavored quinoa burgers are also very good indeed. 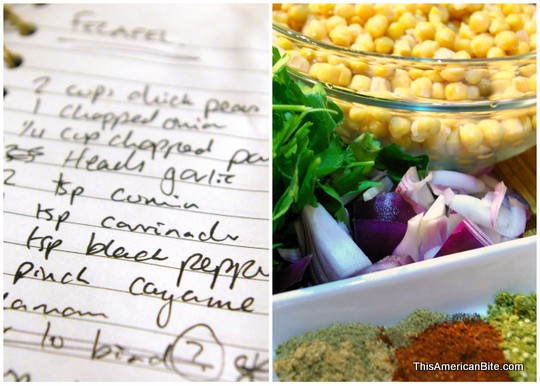 To make 30 falafel balls, you will need the following ingredients:

Transfer the falafel mixture into a non-metallic bowl and add 1/4 cup of flour and one egg to bind the mixture.  Mix the flour and egg well so you don’t get any flour pockets. 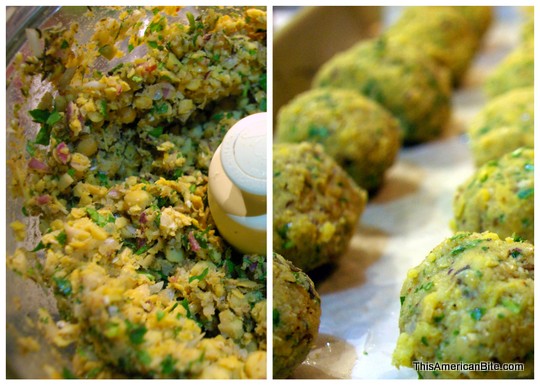 Using a teaspoon, scoop 1.5 tsp of the falafel mix into your hands then use the spoon to mold them into a ball shape.  Press the mixture so that it is firm – this will prevent them from disintegrating when you fry them. 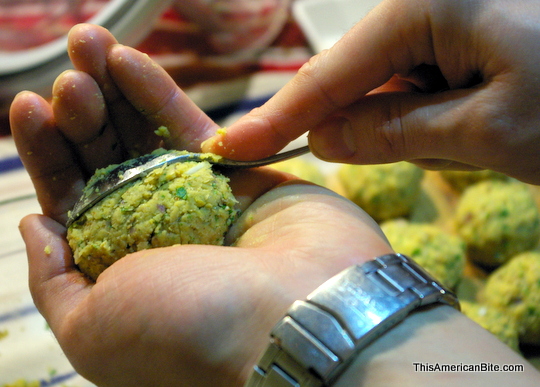 I don’t own a deep fryer, but I do own and swear by the Chef Basket.  Use any pot of dutch oven, fill it with a neutral oil, like canola, vegetable or grapeseed oil and use a chef basket.  If you don’t own one, they cost less than $5 including shipping (buy one on Amazon).  If you have a candy thermometer, wait until the oil reaches 350 degrees before frying putting the falafel balls into the hot oil to fry.  If you do  not have a candy thermometer, you can put one of your falafel balls into the oil, if it’s not hot enough it won’t cook and it may start to disintegrate.

When you are sure the oil is hot enough, gently place the falafel balls into the hot oil.  Don’t crowd the falafel, let them swim in the oil for two minutes, until golden brown.  If the top of the falafel float above the oil, turn them with a spoon then fry for another minute.   The falafel will cook quickly at this size, so be ready with a plate covered with a sheet of paper kitchen towel to soak up and excess oil once cooked. 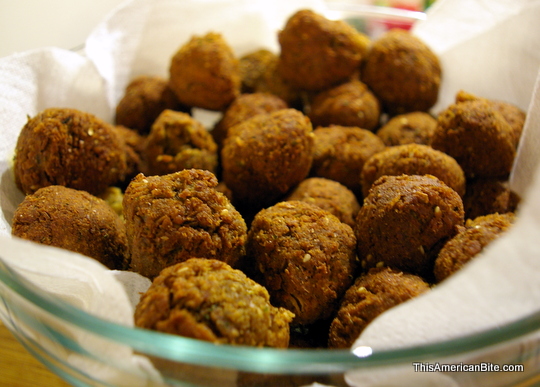 Falafel are best served fresh from the oil but you can re-heat them in a warm oven (no hotter that 250 degrees).  Serve with pitta bread, hummus and schug if you like a touch of spice, or serve on a bed of taboulah salad and drizzle with fresh tahini.