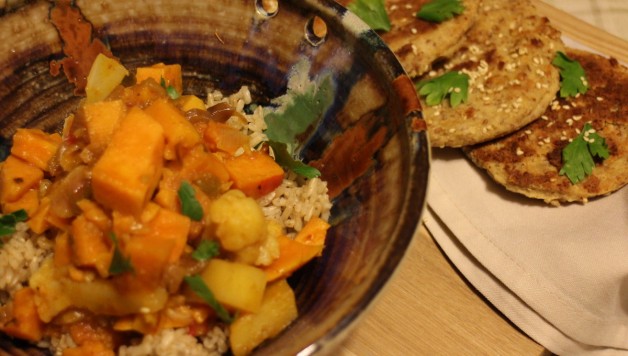 My mother makes delicious Indian food.  She credits the authenticity with which she  blooms the spices to the Indian neighbor she befriended in the early 80s.  When we were first married, my wife asked my mother how to make the perfect curry and the knowledge has been kept in the family.  I just don’t know how to perfect the art of Indian food.

This recipe is not an authentic, from-scratch recipe.  It’s another quick and easy meal (just like that 15 minute salmon) that you can make ahead or serve right away. It’s easy because I used a jar of madras sauce.  Perhaps the first time I have used a “sauce” on this website, but you’ll forgive me when you see how easy it is to make the naan from scratch.

Consider this the quick version of the Cauliflower and Sweet Potato Curry kindly shared by Rinku a couple of weeks ago, and if you’re in the mood for an awesome authentic korma, Simon Majumdar’s recipe is out of this world. 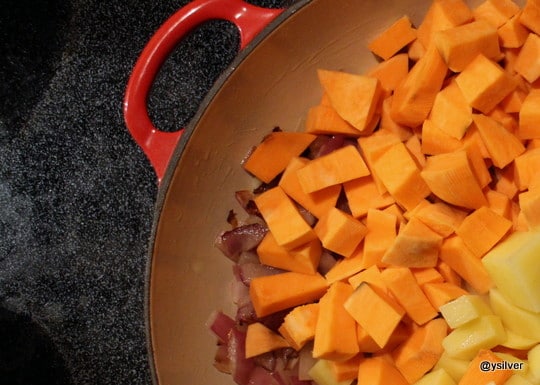 Seriously, that naan is the shining star of this dish.  I’ve long been looking for a gluten free, dairy free and kosher naan bread.  Every time I’m in Trader Joes or Whole Foods, I would hope to find a shiny new naan on the market, but it never happened.  I don’t need someone else to make naan for me anymore though because this one has just three basic ingredients. Quinoa flour, almond flour and coconut milk.  The quinoa flour from Bob’s Red Mill is perfectly ground, you wouldn’t know it wasn’t wheat flour! 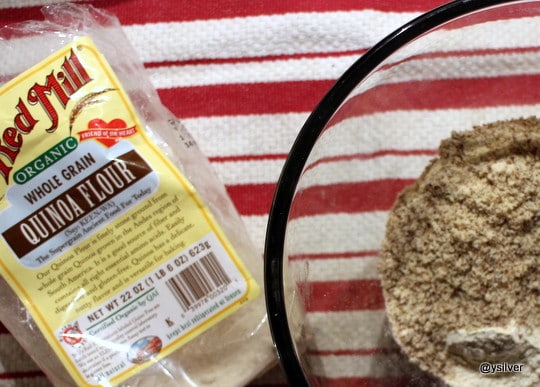 Sweet potatoes and naan.  That’s one way to make me happy!

Drizzle some olive oil in a large pan.  My shallow Le Creuset braiser is perfect for this as it allows me to fry the onion and root veggies now and add plenty of liquid later.  Dice the red onion and fry on medium heat for ten minutes or until soft and they are starting to brown.

Once the sweets and potatoes start to soften, add the jar of sauce and a cup of coconut milk.  You could also use almond milk if you prefer.

Cover the curry and allow it to cook on a medium low heat for 40 minutes.

Serve with naan (recipe below) or lemon clove rice. 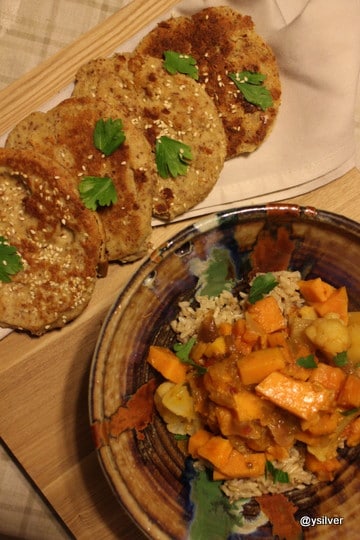 Combine all the ingredients and whisk until the dough resembles pancake batter.

Pre-heat a skillet and melt some coconut oil for frying.  Once the oil has melted, spoon 1/3 cup of the batter into the skillet and fry for four minutes or until golden brown.  Flip and cook for another two minutes. 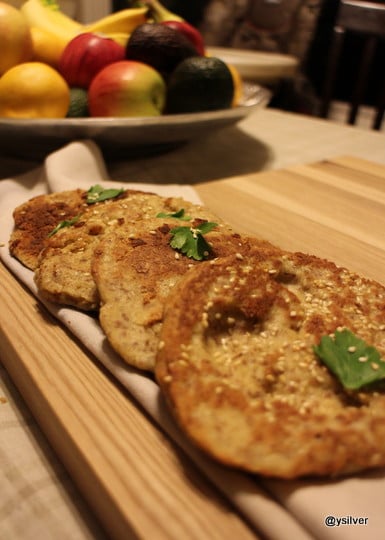