It’s true, I skipped a week, I’m sorry.  In the midst of the preparing for our son’s second birthday I failed to blog last week.  I have two wonderful guest posts lined up for you (including a long-promised Vegan Slow Cooker Giveaway) but after my hiatus, I raided the fridge last night to cook for you, and what a joy it was. In less than two hours I made strawberry jam, teriyaki rice with spinach and finally, this wonderful Baked Potato Soup with it’s sweetness coming from grilled corn on the cob.

I happened to have baked potatoes and corn left in the fridge from last weeks birthday party, and this is a great way to use up those ingredients.  That said, I would not hesitate to bake potatoes and grill corn just for this recipe.  The baked potatoes give this soup a rich creaminess while the dish remains dairy free – and completely vegan.

You will need the following ingredients.

Sweat your leeks in the bottom of a pan and in the mean time, cut the corn from the cob, then add it to the pan.  Dice your baked potato into even chunks then add to the vegetables. 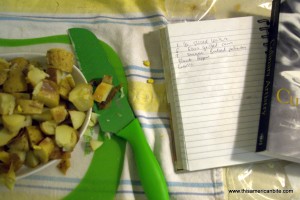 Add one cup of soy milk followed by two cups of water and mix, then add a generous amount of black pepper followed by garlic salt, thyme and the bay leaves.

Bring to the boil and puree with an immersion blender, stir in a teaspoon of marmite then add three more cups of water and bring to a slow simmer for 20-30 minutes.  Serve with home made croutons and next time you grill, make sure you have some extra corn and potatoes when you are done!