Food is incredibly influential.  At the best of times, cuisine can unite families, communities and even nations, keeping memories and traditions alive for hundreds of years.  At other times, the things we do (or don’t) eat, can divisive or polarizing.  Pushing that culinary envelope has a time and a place, so make sure you’re not offending the memory of a family member if you decide to shake things up.

Latkes, or potato pancakes, are essentially hash-brown patties, fried in oil.  Latkes appear in Jewish homes across the world for the week of chanukkah and the latke is certainly a food that unites people.  Because latkes are often served at gatherings or dinner parties, most latke recipes are written for a large crowd.

I’m doing something a little differently.

Not only am I deviating from the salt and pepper seasoning and inviting Sweet Potatoes into this tradition, I am sharing a small-batch recipe, perfect for two to four people.  I’ll confess, this “small batch” was truly a test batch, but the quantity and quality of the latke was noteworthy, and how could I go all week without adding another latke variety to the world of food blogs?

Potatoes can start to brown once you peel them.  This browning, or oxidization, is a result of the enzyme polyphenol oxidase reacting with oxygen in the air.  In the produce world, this is comparable to metal that rusts when left in the rain.  The browning can be prevented by putting potatoes in water but once you grate the potatoes you are going to want to work quickly so I suggest you get all of your ingredients ready before you start cooking. 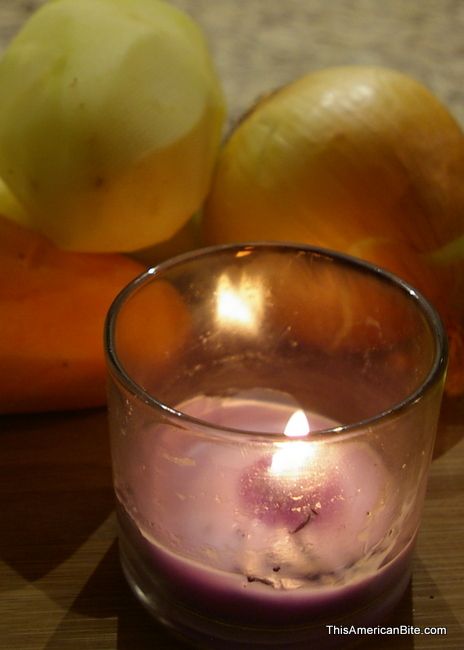 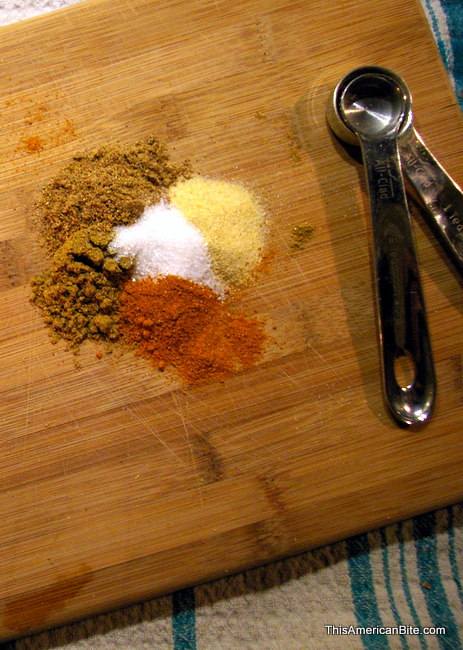 Measure 1 teaspoon each of cumin, granulated garlic, tandoori masala, coriander and put them in a bowl.  Add half a teaspoon of salt and keep the pepper nearby.  Then, peel your potatoes, sweet potato and onion and set the produce in a bowl of room-temperature water. 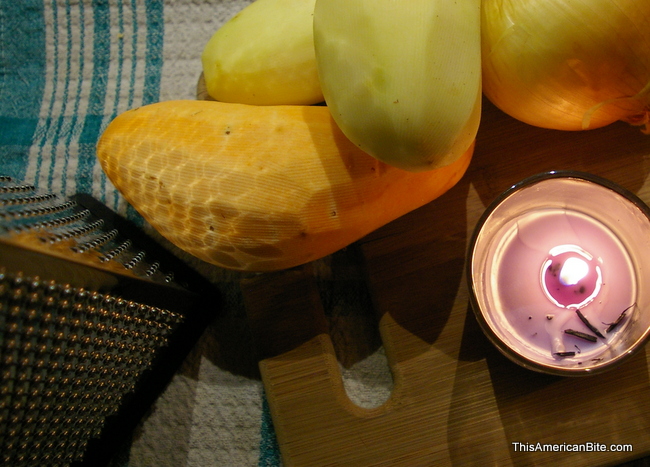 Place a skillet on a medium heat and cover the bottom of the skillet with canola or vegetable oil for frying.  Grate the potatoes, sweet potatoes and onion – I chose to do this using a box grater as this is a small batch and it hardly seemed worth getting the Cuisine Art dirty.  Use a combination of the large-whole grater and the small hole shredder to find a good balance of texture.  My suggestion is to start on the small hole shredder side and move to the large whole grater when you have about half of the vegetable left – you’re less likely to cut yourself on the large-hole grater! 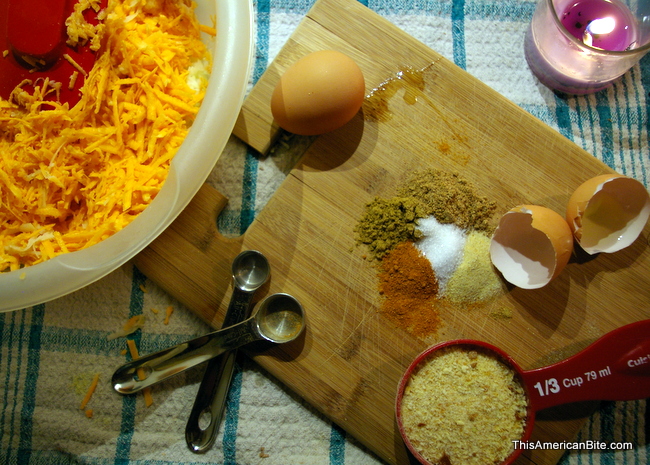 Add two eggs to the mixture, along with your spices and 1/3 cup of breadcrumbs or matzoh meal.  Don’t worry if you only have seasoned breadcrumbs in the house, I used a the zaatar garlic breadcrumbs that were in the freezer, made from last week’s leftover bread. Add black pepper and mix well.

Use the 1/3 cup measure to form the pancakes.  The pancakes will be fairly thick, so we’re going for a crispy on the outside, soft in the middle approach.  If you like a crispier, flatter latke, you can use a 1/4 cup measure or form the pancakes with your hand.    Put the latkes in the hot oil but do not crowd them. Make sure there is plenty of space so you can flip them.  I would say no more than 4 latkes in a 10″ skillet. 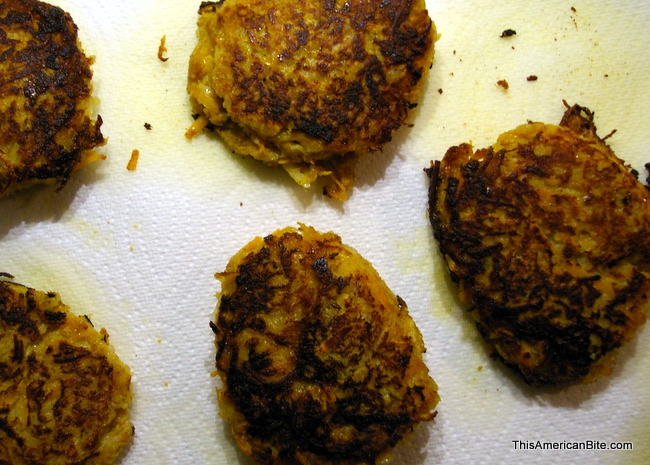 After about 4-5 minutes, the latkes will start to brown.  If making the thicker pancakes, keep them frying for a few more minutes before flipping.  For the thinner pancake, flip ’em and fry ’em for another 4 minutes.  Then take them out of the oil and let them rest on paper towel so the excess oil can be absorbed. 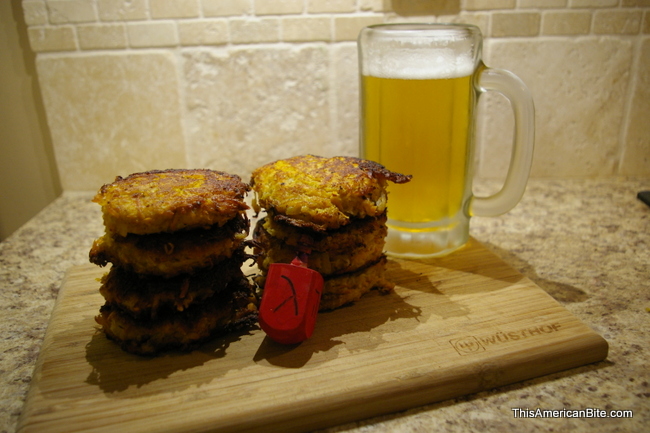 Fry the latkes in batches, the lay on a paper towel. Allow them to cool a little, but plan to eat them right away.  Latkes aren’t the best prep-ahead food, but if you want to keep these warm for later, lay them on a cookie sheet and set your oven to 200 degrees.

In North America, Apple Sauce or Sour Cream are the condiments of choice, but for the recipe I am sharing with you tonight, skip the condiments and eat them alongside your favorite beer or Hanukkah Cocktail.