Today’s post comes to you from New York City.  I’m on the East Coast for this year’s Kosher Food and Wine Experience and if it’s anything like last year’s event, it really will be a celebration of kosher wine and fine dining.  While I’m travelling, some of my fellow food enthusiasts have kindly offered to share their recipes with you.  Today’s recipe, which looks awesome, is an appetizer from my friend Chanie who writes at Busy in Brooklyn.  We tend to share a love of dukkah, zaatar and all things Middle Eastern and her grilled corn with zaatar and garlic butter was recently featured in the HuffPo.

Enjoy this Chanie’s recipe today, and keep your eyes peeled for the Black Forest Coconut Candy (paleo, gluten-free and refined sugar free!) recipe from another friend later in the week.

With the popularity of books like Jerusalem and Balaboosta, Middle Eastern Cuisine is all the rage right now. In this Jerusalem-inspired appetizer, the flavors of cumin and za’atar take front stage and the humble chickpea becomes a bed for a mouthwatering topping.

Interestingly enough, chickpea cakes, or panisse, originated in Northern Italy and are a culinary favorite in the South of France (where it’s called panelle). Their preparation is similar to that of polenta, and are popularly cut into strips and fried.

When This American Bite invited me to guest post on his blog, I remembered this old post for grilled polenta cakes and decided put an Israeli spin on it, using some of Yosef’s favorite flavors. 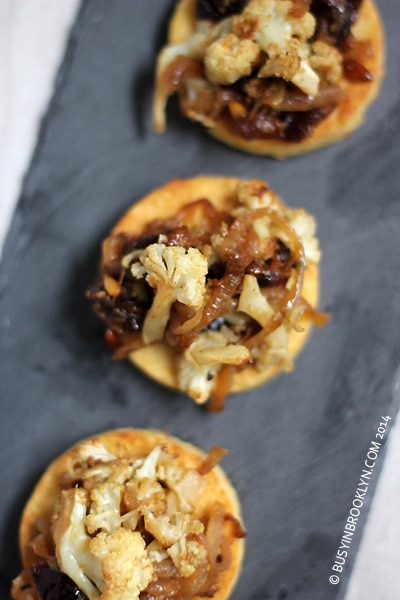 This recipe was kindly contributed by Busy in Brooklyn.

Heat up the water, salt and oil in a pot without boiling. Slowly add the garbanzo flour, whisking so that it doesn’t form lumps. Add the spices and cook over low heat until the mixture thickens and pulls away from sides of pan, about 10 minutes. Pour the batter into a greased 9×13 pan and set aside to cool.

Once solidified, cut circles with a cookie cutter and fry in oil until golden on both sides.

Information! Note that while panisse is usually deep fried, I have panfried it successfully in 1/2″ of oil. If you wish to deep fry them, you may do so.

This recipe was kindly contributed by Busy in Brooklyn.

Method: Preheat oven to 450 degrees. Spread cauliflower florets on a baking sheets and drizzle with olive oil. Sprinkle with za’atar and kosher salt and bake for 30-40 minutes, until crisp and slightly browned around the edges.

In a pan, saute the onions in olive oil until caramelized. Add prunes and 1/4 cup water and stir until prunes open up and soften. Add pine nuts and gently stir in the roasted cauliflower. Serve over chickpea cakes. 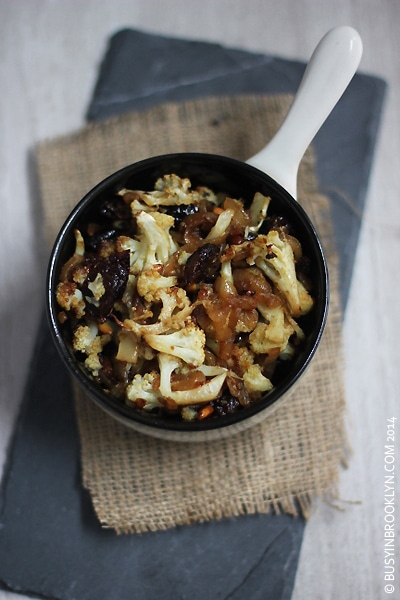