One of my favorite pastimes is re-creating food we’ve eaten when dining out. Sometimes these creations go well, other times there’s a reason we go out for dinner. For weeks now I have been toying with the idea of re-creating Fish Tacos, a family favorite, and I have impulsively checked this of my list. I had no idea how quick or affordable this dish was, I don’t imagine this cost more than $5 for three of us to eat, and it tasted amazing. Even if you’re not much of a cook, try this, especially if you want to surprise your wife and let her have a night off from cooking. You’ll need the following to serve three people:

Get the salmon cooking, if it’s frozen it will take a little longer. I just threw this in a skillet, ground some black pepper right on it, then squeezed a lemon and a lime in to the skillet. Turn is once it looks like it’s thawed. If it’s still pink in the middle and you’re worried about overcooking your fish, throw it in the microwave for 30 seconds to finish it off. Add some black pepper and mayo to your shredded cabbage, squeeze some lemon or lime over the slaw if you like the zesty kick. When you’re almost ready to assemble the tacos, throw each tortilla on the naked gas flame for 10-15 seconds, this will toast them nicely. BE CAREFUL – don’t let them burn, and don’t burn your fingers. If you’re less adventurous, throw them in the microwave for a few seconds, but this won’t give you that nice toasty feeling. If you like a spicy kick, serve with some siracha or hot sauce. Be warned, you might want to double this recipe so you’re not disappointed. Unfortunately we ate these before I had the chance to take a photo of the creation, so I credit joannova for the some-rights-reserved photo. Enjoy! 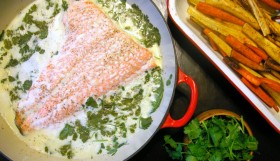