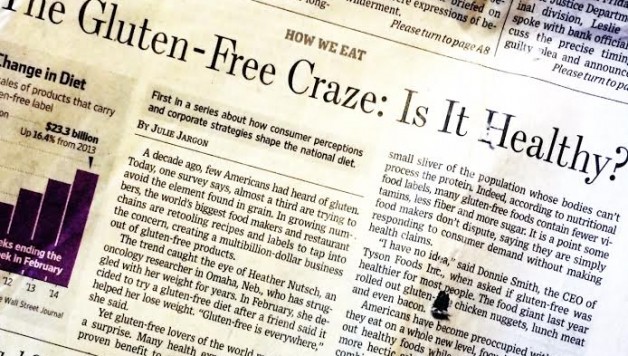 Don’t Pick on Gluten. It’s Your “Food” That’s The Problem.

I don’t eat gluten.  I often get asked why and in truth, it started as an experiment.  I don’t eat gluten because when I do, I don’t like how I feel.  In fact, this happened earlier in the week:

My gluten free lifestyle, just like my choice to eat kosher food,  isn’t something I see as a limitation, in fact, I feel like I end up making better food choices as a result.  Perhaps that’s why James Freeman’s piece, This Story Is Gluten Free, in the Wall Street Journal caught my attention.

As I read this piece, I felt like Freeman was using his voice to mock real issues that are influencing the modern food chain.  There are people out there working real hard to create greater transparency in our food supply and make food better for everyone.  Maybe I need to be working harder to raise awareness too.

This Story Is Gluten-Free

The latest assault on traditional diets seems to have missed the target.

As Julie Jargon noted in the Journal this week, “Many health experts say there is no proven benefit to going gluten-free except for a small sliver of the population whose bodies can’t process the protein.

My personal knowledge of gluten free eating is based on three things;  reading Wheat Belly (William Davis), deciding not to eat gluten anymore and being married to a Health Coach who is certified by the American Association of Drugless Practitioners.  In his book, William Davis seems to suggest otherwise.  Food in America has evolved.  Our wheat has evolved.  It’s not unreasonable to question if the body needs time to evolve to eat our modern wheat and grains. Within weeks of cutting gluten out of diet, I felt like I had more energy and felt less lethargic after meals.  Does this mean I am one of the small sliver of the population” to be effected?  Maybe.  Is this all psychosomatic?  Maybe, but would my body react the way it does when I eat gluten by mistake?

Indeed, according to nutritional food labels, many gluten-free foods contain fewer vitamins, less fiber and more sugar. It is a point some food makers don’t dispute, saying they are simply responding to consumer demand without making health claims.”

Here lies one of the biggest mistakes of the gluten free “fad”.  Replacing all your breads, cookies and cakes with gluten free alternatives doesn’t mean you’re eating healthy food.  Going gluten free is just half of the nutritional benefit.  A gluten free lifestyle combined with a “shop the perimeter” mindset (and regular exercise) is a better approach.

Meanwhile, the decades-old war on fatty meat may also be approaching an inconclusive end, and it doesn’t smell like victory. As Trevor Butterworth noted in reviewing Nina Teicholz’s “The Big Fat Surprise,” the war hasn’t produced the hoped-for reductions in heart disease.

Will any crusade against one food group solve heat disease, cancer or obesity?  I don’t think so.  We live in a time that demands instant gratification.  Preparing food from scratch takes too long for too many in this day and age. Believe me on those really long days when the kids are tired and us parents are equally worn out, I’d love a shortcut, but I’m never going to run to a drive-thru for dinner.  More often than not, that quick meal is not food, it’s cheap fuel.

“What was left, as Ms. Teicholz adumbrates, was a monstrous thought: What if the crusade against cholesterol had fed the spread of obesity by encouraging a population to retreat from the very foods that would have satiated its hunger more efficiently than the hallowed grains and fruits and vegetables of the great dietary pyramid? What if the low-fat mantra had driven a population into feeling perpetually hungry? What if you were better off eating meat, eggs and dairy than a diet bloated in carbs and vegetable oils?” And for anyone who’s paying attention, we’re still waiting for proof that the monstrously expensive movement toward organic foods has any health benefits at all. Last year the Journal’s news editors invited two academics to weigh in on the question. Dr. Janet Silverstein, professor of endocrinology at the University of Florida’s medical school, wrote that there was “no definitive evidence” that organic food is more nutritious or healthier than conventional food.

I struggle with this one because I want to trust science.  I really do, but perhaps this study was looking at the wrong thing.  Organic or spray-free foods may not be more nutritionally rich, but they are sprayed with pesticides.  Pesticides are known to be harmful. Signage warning about pesticides in water, hazardous pesticides in waste, or simply stating “danger – pesticides” are commonplace.  You can buy them online for as little as $10.  If pesticides are entirely safe, why do we need these signs? Please explain to me how pesticides are dangerous during application and become safe once they are in my food.

The other side of this argument is typically carried by people interested in health  policy as opposed to actual doctors.

Actual doctors have tremendous power and opportunity to offer nutritional advice and better the lifestyle of their patients.  It’s easy (and profitable) to write a prescription,  And there’s a revenue stream associated with it.

But even Chensheng (Alex) Lu of the activist Harvard School of Public Health (not to be confused with the Harvard Medical School) had to concede: “Is there definitive scientific proof that an organic diet is healthier? Not yet.” More recently in our pages, former FDA official Dr. Henry Miller described the downside of the organic-food mania: “A study by the Institute for Water Research at Ben-Gurion University in Israel, published last year in the journal Hydrology and Earth System Sciences, found that ‘intensive organic agriculture relying on solid organic matter, such as composted manure that is implemented in the soil prior to planting as the sole fertilizer, resulted in significant down-leaching of nitrate’ into groundwater. With many of the world’s most fertile farming regions in the throes of drought, increased nitrate in groundwater is hardly a hallmark of sustainability.” Dr. Miller added, “Compost may also deposit pathogenic bacteria on or in food crops, which has led to more frequent occurrences of food poisoning in the U.S. and elsewhere.” And we haven’t even mentioned the manufactured terror about “genetically modified organisms,” which is a scary way to describe plant breeding. As Robert Paarlberg wrote in these pages in 2013, “The U.S. Food and Drug Administration has long opposed the mandatory labeling of GMO foods because it agrees with a scientific consensus that these foods so far bring no new risks to human health or the environment

If there is no risk, then why don’t we want to put this information on the label?  Let’s take this one step further; if we are proud of the advances in GMOs, why don’t we want to display it proudly on the packing? Food labels speak to many audiences and include all sorts of information.  Country of origin, presence of common allergens or symbols stating they are vegan, kosher or hallal are all acceptable, but each of these facts speak to a specific consumer segment. This lack of transparency tells me that there is something to hide.  If the food industry is concerned that transparency will harm sales, then the FDA is protecting the food industry and not the consumer.

All of the leading national science academies in Europe have reached this conclusion. Three years ago, the Research Directorate of the European Union concluded that biotechnology, and in particular GMOs, ‘are not per se more risky than, for example, conventional plant breeding technologies.’ Nonetheless, campaigns by activist groups such as Greenpeace have so scared consumers that most GMO food products have been kept out of the American marketplace.”

I don’t disagree with this statement, but it neglects the fact that many Asian and European countries have banned the import of American Wheat.  American Eggs would be illegal for sale in the United Kingdom.  I’m sensing a disconnect.   The US bans the import of Kinder Surprise Eggs because they might be a choking hazard but artificial flavorings, that might be derived from rubber or petroleum, are “safe” ingredients in kids classics and sandwiches alike.

Perhaps on July 4th we should all resolve to enjoy factory-raised grilled meats and be grateful for what’s left of the freedom to make our own decisions.

Amen to that.  Well, part of that.  Let’s give every American consumer the freedom to make their own decisions.  Let’s label our food with transparency and let people understand what the food they are eating is doing to their body.  I’d invite you for a July 4 dinner, but it’d be gluten free.

Don't Pick on Gluten. It's Your "Food" That's The Problem. My reply to @FreemanWSJ @TheAbridgedZach – http://t.co/fpH6QadBuD #glutenfree